How We Became Involved with the Singer-Loomis

Wanting to do Research on Individuation—in Pakistan In 1989, Elizabeth Kirkhart passed her doctoral qualifying exams, was ready to begin her dissertation research and knew she would soon be living in Pakistan for several years. She wanted to do an empirical study of the process of individuation (psychological development). She wanted to build her research on personality concepts developed by the famous Swiss psychologist, Carl Jung, she embarked on an extensive literature search to review research on individuation. She discovered that the professional publications on individuation were limited to clinical observation of one or two individuals or based on generalizations from a Jungian oriented therapist’s observations of numerous clients in clinical practice. There apparently were no Jungian based, non-clinical, empirical studies of individuation. 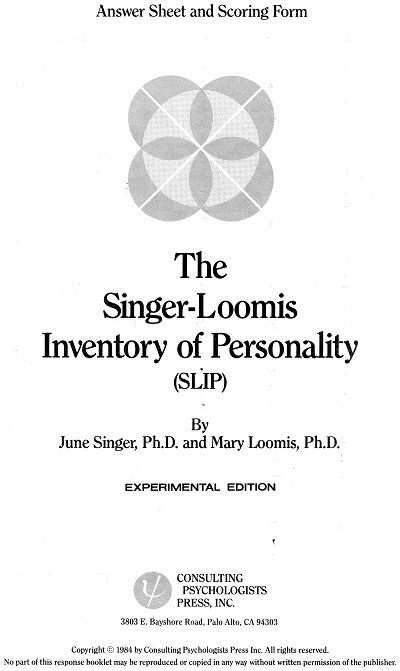 ckly seemed that no such inventory existed. However, while she and her husband were thumbing through various catalogs from publishers of psychological inventories, they discovered that June Singer, a Jungian analyst whose work they were familiar with, was mentioned in the current Consulting Psychologists Press (CPP™) catalog. Knowing that CPP was the publisher of the Meyers-Briggs Type Inventory (MBTI™), they were intrigued.

They checked the catalog description and discovered that two Jungian analysts, June Singer, PhD, and Mary Loomis, PhD, had created the Singer-Loomis Inventory of Personality (SLIP). They learned that the SLIP was based on concepts developed by Carl Jung in Psychological Types or the Study of Individuation (1921) and was designed to measure eight different psychological processes using a five-point scale. Copies of the paper and pencil personality test were obtained. Examination of the Inventory revealed that the SLIP did not presuppose and require Jung’s personality concepts to be in a bi-polar relationship. This meant it would be possible to empirically explore personality functioning from a far less restrictive perspective.

From a design point of view, the primary purpose of the Singer-Loomis was to measure personality functioning. This was exactly what Elizabeth needed to conduct her dissertation research. However, for some reason, the description in the CPP catalogue labeled the SLIP “Experimental”–a definite “red flag” to a researcher. When June Singer was contacted and asked about this label, she said that in addition to the research she and Mary Loomis done when creating the SLIP, they had conducted additional research required by Consulting Psychologists Press to remove the “Experimental” label and were awaiting the change in the catalogue description. She also suggested reading research she and Mary Loomis had published in the Journal of Analytical Psychology.* This led to Elizabeth deciding to use the SLIP as the basis for her research.

Because the Kirkharts had several years experience developing and delivering management training in Pakistan, Elizabeth was aware that some of the situations and a few of the items in the SLIP would need to be modified to be appropriate in the English speaking, cultural context of Pakistan–an overwhelmingly Muslim country. In consultation with June Singer, changes were made, the Inventory was field tested in Pakistan and, after further minor adjustments, it was ready for administration. Elizabeth administered the Singer-Loomis to over 1,000 English speaking Pakistani men and women in age groups ranging for early 20’s to mid-70’s. This data provided the basis for her doctoral dissertation.

Events Leading to the Creation of Moving Boundaries, inc.:

From time to time while was collecting data and writing her dissertation, Elizabeth was in contact with June Singer. She learned that June and Mary wanted to transfer ownership of the Singer-Loomis to an organization that would focus on the field of human resource development as well as clinical practice. After Elizabeth and Larry returned to the US from Pakistan, they met with June Singer and Mary Loomis on several occasions to explore the possibility of transferring the copyright for the Singer-Loomis to them. The copyright for the Singer-Loomis was transferred in early 1996 and Moving Boundaries, inc. came into existence in May of the same year.