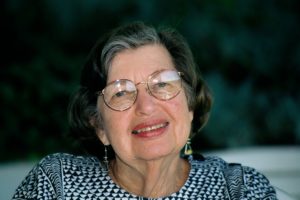 June Singer (1919-2004) was a second generation Jungian analyst. She did her analyst training in the early 1960’s at the C.G. Jung Institute in Kuznacht, Switzerland with Jungian analysts trained by Carl Jung. After completing her training in 1964, she returned to Chicago, Illinois where she was the sole Jungian Analyst in the metropolitan area. She received her Ph.D. in psychology from Northwestern University in 1968.

In the context of a growing network of Jungian analysts practicing in the Chicago area, she initiated the idea of creating the C.G. Jung Institute of Chicago. With the help of a number of colleagues the Institute was incorporated in 1976 as a non-profit organization. Dr. Singer was also a founding member of the Inter-Regional Society of Jungian Analysts—the first institute for training analysts not located on either the East or West coast. In 1980 she moved to Palo Alto, California and became a faculty member and Director of the Transpersonal Counseling Center at the Institute of Transpersonal Psychology. She joined the faculty of the C.G. Jung Institute of San Francisco where she was active until she moved to Cleveland, Ohio in the late 1990’s. Dr. Singer gave many workshops, seminars and presentations to both lay and professional audiences all over the world, including Australia, Canada, Europe, and the United States.

Her first book, The Unholy Bible (1970) –a study of William Blake, was a revised version of the thesis she wrote for her analyst training. Perhaps her most famous book, Boundaries of the Soul, was published in 1972 and revised in 1994. In addition, she published Androgyny (1976), Modern Woman in Search of a Soul (1998), Knowledge of the Heart (1999), The Power of Love (2000) and A Gnostic Book of Hours (2003). Blake, Jung and the Collective Unconscious (2000) was co-authored with Esther Harding. She has an extensive number of single-authored and co-authored articles in numerous journals and edited books.